How Does Chamomile Tea Help with GERD, Acid Reflux, and Heartburn?

You probably know that chamomile tea is great for inducing sleepiness. But don’t underestimate this tasty tea: it does so much more! From easing digestive distress, reducing anxiety, and relieving pain, chamomile does it all.

For those looking for more natural alternatives to traditional medical treatments, this is great news. Delicious and soothing, chamomile tea is a wonderful alternative to antacids. But how does this work? The key lies in chamomile tea’s anti-inflammatory properties.

Inflammation is correlated with many gastrointestinal disorders. Acid reflux, heartburn, and GERD cause acidic stomach juices, fluids, and food to push back up from the stomach into the esophagus, causing painful inflammation.

So naturally, a treatment targeting inflammation can soothe the area and offer effective pain relief. Chamomile tea has long been touted for its anti-inflammatory capabilities. The flowers of chamomile contain 1–2% volatile oils including alpha-bisabolol, alpha-bisabolol oxides A & B, and matricin (1).

Once in our body, these are then converted to chamazulene and other flavonoids which possess anti-inflammatory and antiphlogistic properties.

Animal studies (2) have demonstrated that chamomile tea offers “potent anti-inflammatory action, some antimutagenic and cholesterol-lowering activities, as well as antispasmodic and anxiolytic effects.”

Further human studies are needed, but many anecdotal accounts support these findings. Chamomile tea may actually be able to replace your antacid altogether, with a 2006 review of studies (3) demonstrating that chamomile extract lowered gastric acidity as effectively as a commercial antacid.

The same extract was better than antacids at preventing secondary hyperacidity. Of note, chamomile was not the only herb in the extract, so further studies are needed before scientists can definitely determine that chamomile alone was responsible for these effects.
Chamomile and Anxiety-Induced Digestive Issues

Chamomile tea may also help reduce GERD symptoms indirectly. GERD can be exacerbated or potentially even caused by stress with 45.6% of patients reported “feelings of continued stress.

Chamomile is an excellent stress-relieving treatment, with a 2017 study (4) showing reductions in cortisol levels with chamomile treatment. Cortisol, the stress hormone, is associated with high levels of stress and anxiety.

A 2009 study (5) showed chamomile improved symptoms in people suffering from Generalized Anxiety Disorder (GAD), with the authors noting, “We observed a significantly greater reduction in mean total HAM-A score during chamomile versus placebo therapy (p=0.047).” Up to 50%! Not bad for what is often thought of as solely a bedtime tea.

A 2013 study (6) showed that chamomile may have modest anxiolytic (anti-anxiety) abilities for people with mild to moderate Generalized Anxiety Disorder. By reducing anxiety and stress, you may find that your digestive symptoms improve, too.

To try it for yourself, check out these anti-anxiety tablets that include chamomile. 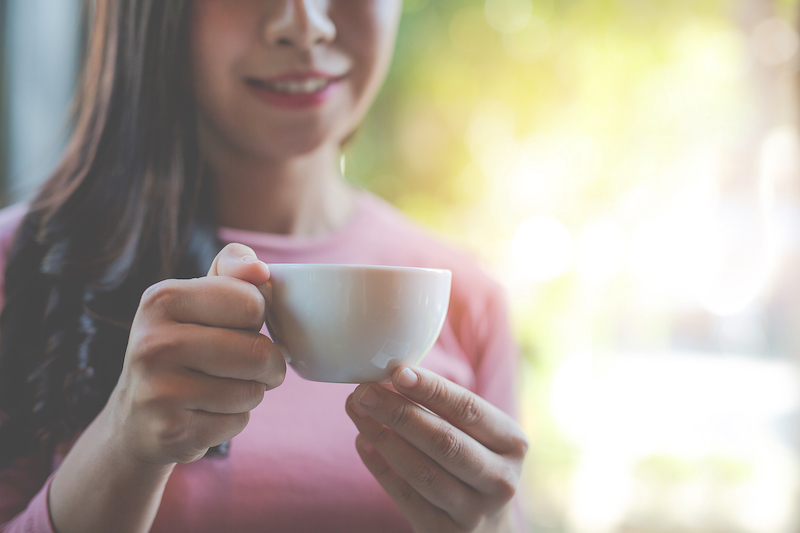 One thing to keep in mind is that GERD symptoms, heartburn, and acid reflux symptoms are affected by what you eat.

Certain foods can actually cause acid to leak into the esophagus. Foods with higher levels of acid tend to trigger symptoms, so that means coffee, alcohol, acid juices, and colas are off the table.

Chamomile tea is a wonderful option for a low-acid beverage. It’s soothing and comforting for upset stomachs, hydrating, and delicious. Plus, it has no caffeine, so it’s perfect for any time of day. However, if you are allergic to ragweed, you should avoid chamomile tea.

Evidence (7) suggests that chamomile tea can relieve digestive problems in children including diarrhea and colic. In one study, an apple pectin-chamomile extract reduced the course of diarrhea in children and also helped relieve symptoms.

In fact, for 85% of children, diarrhea ended sooner in children treated with chamomile and pectin than in the placebo group, who saw 58% improvement.

Other clinical trials studied the efficacy of chamomile as colic treatment. This was a randomized, double-blind, placebo-controlled study of 68 healthy term infants suffering from colic. This extensive study found that after 7 days of treatment, the tea eliminated the colic in 57% of the infants, whereas the placebo reduced symptoms in only 26% of cases.

It’s important to buy high quality chamomile teas to get the most benefits from your cup.

Buddha Teas is one of the most popular and best chamomile tea brands on the market. The quality that comes with this tea product will offer you the full benefits of chamomile as a relaxant, digestive aid, and all-around daily delight.

Traditional Medicinals is another top-selling organic brand that has been a trusted tea producer since 1974. This organic chamomile tea is a great place to start!

Tadin is another delicious and high quality tea brand, and this chamomile tea has a lovely aroma.

Bigelow’s Cozy Chamomile tea is a bit sweeter, perfect for those looking to avoid bitter tea. Click here to read an in-depth review of these popular chamomile teas.

Give these a try, and let us know what your favorites are!

Also Read: The Best-Selling Herbal Teas in The Market

It’s important to treat these digestive diagnoses holistically. Other lifestyle changes you can make to help with heartburn include eating smaller meals more often, not lying down after eating, avoiding spicy foods, losing excess weight, and exercise.

If you have a serious diagnosis of gastroesophageal reflux disease, acid reflux, or heartburn, ensure you seek medical advice before making any changes to your medical regime. However, chamomile is a great way to complement your medical treatment plan that comes with few side effects.

Through soothing inflammation and causing anxiety, chamomile tea can help you find real relief. Plus, chamomile is also known to fight cancer (8), relieve pain, and reduce depression. To get some natural relief from your digestive troubles, pick some up today!

Stephanie is a professional writer who is a ‘SIBO survivor’ herself with broad experience writing in the health field. She is a regular writer for SIBO Survivor and calls Berlin, Germany home.