The saying “go with your gut” may seem a little strange if you take it literally.

How can the organs within your gastrointestinal (GI) system play a role in how you feel or process information?

While, according to current data, your gut does not possess the ability to help you memorize details or communicate with others, which are just a few of the important functions of your brain, it has a very important role in maintaining other significant emotional and mental controls that are not typically associated with the function of the GI tract. 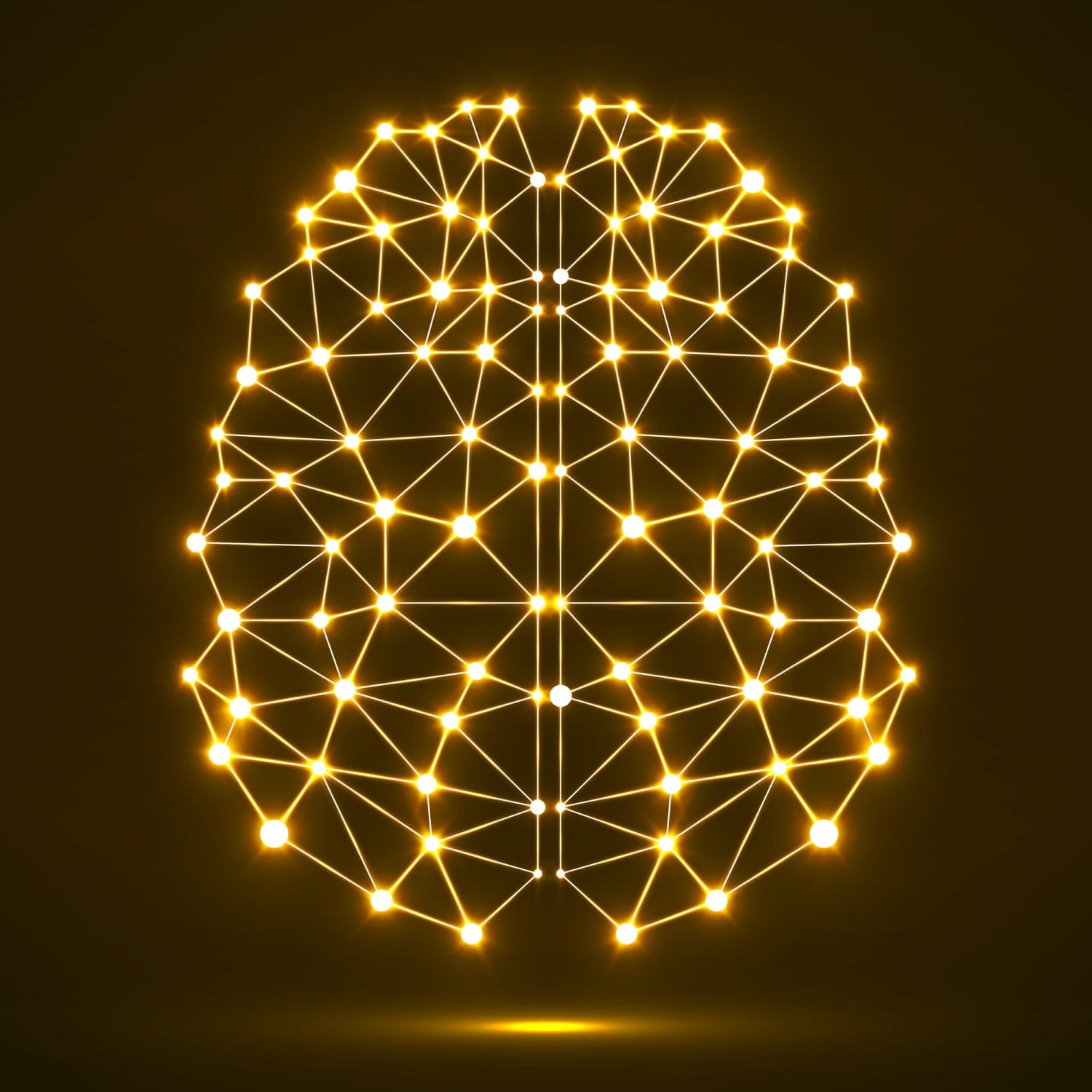 In fact, when the GI system is not functioning properly, such as in diseases like small intestinal bacterial overgrowth (SIBO) or irritable bowel syndrome (IBS), severe effects on your mood and ability to think properly can occur.

These types of symptoms that appear to be outside of the realm of typical GI functions make it particularly important to understand exactly how the gut and brain are connected.

What is the Gut-Brain Connection? 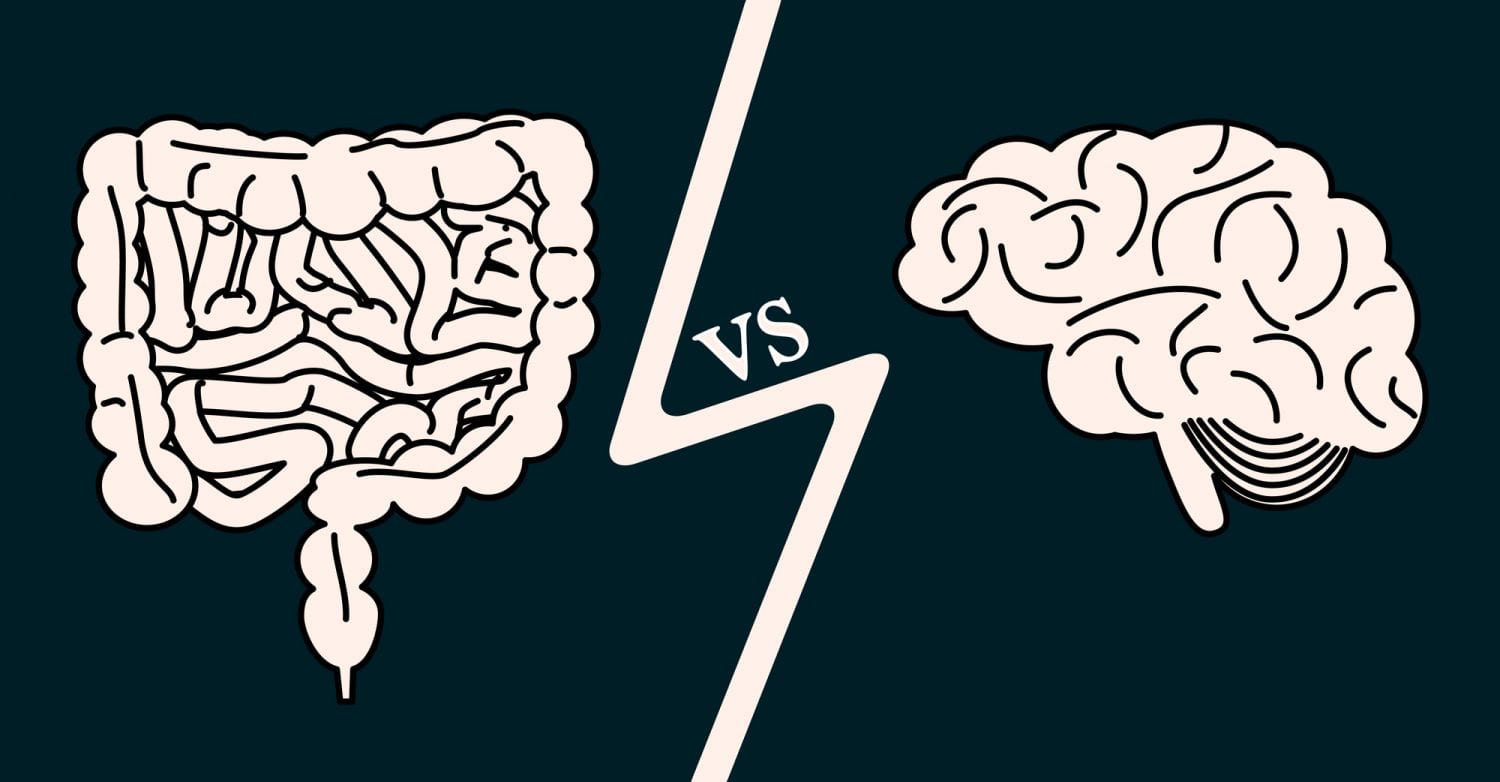 Scientists often refer to the gut-brain connection as the enteric nervous system (ENS). The ENS consists of over 500 million neurons, or nerve cells, that are present within the lining of the organs of the GI tract including the esophagus and stomach, as well as within both the small and large intestine 1.

The ENS, which is also referred to as the body’s second brain, performs functions that are completely autonomous, which means it does not require any direction from the brain to perform its daily functions.

The ENS still communicates with the central nervous system, which consists of the brain and spinal cord, however, GI tract activity such as intestinal motility, secretion, and blood flow is completely controlled by the ENS.

The Psychology of the Microbiome 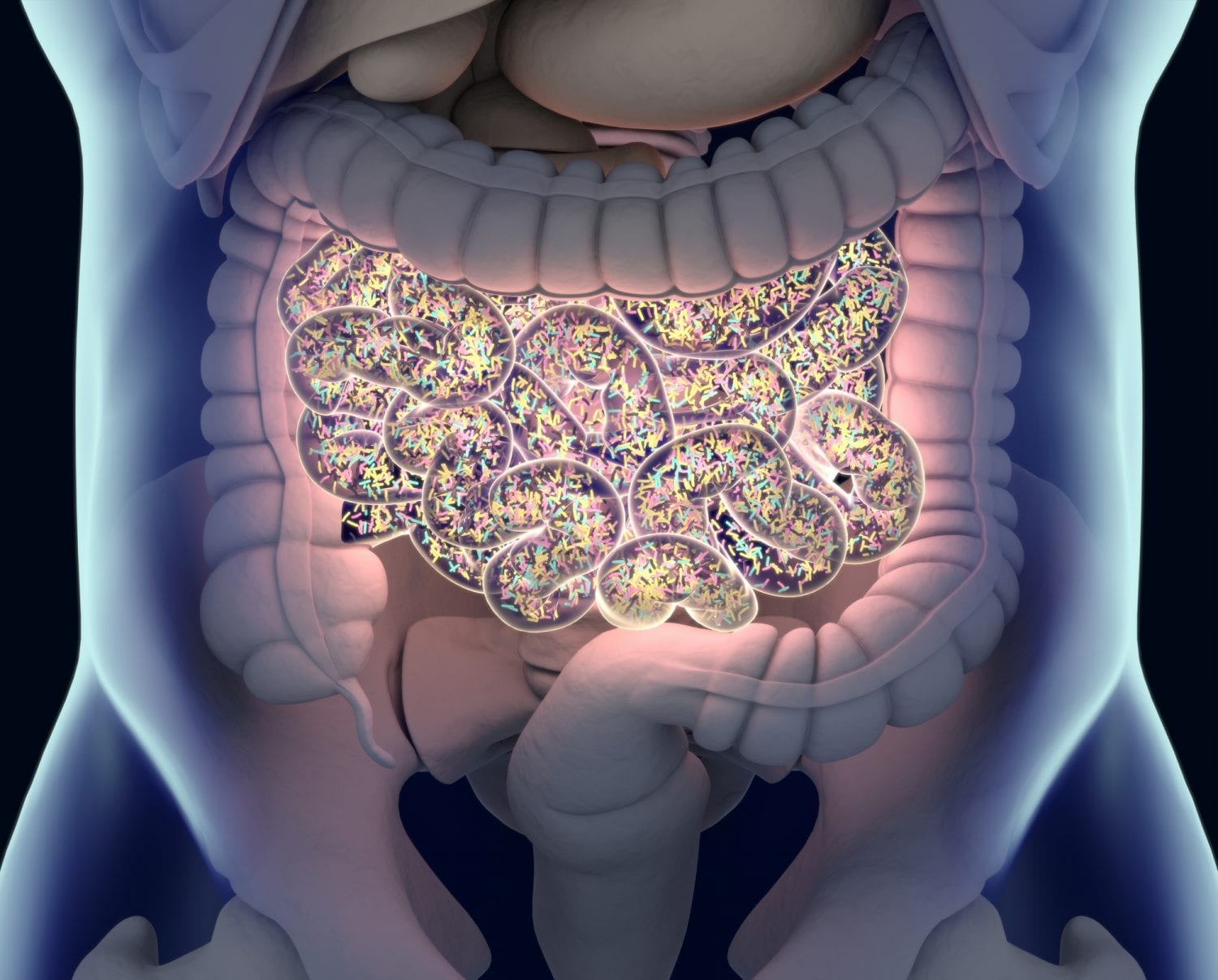 It is estimated that 100 trillion organisms including Bacteria, Archea, protozoans, fungi and other eukaryotic parasites make up the microbiome of the human body 2.

Taken together, the overwhelming population of these cells account for more than 90% of the cells present within the human body, and can cumulatively add up to a mass of almost 1-2 kilograms in a normal adult individual.

As the scientific world has become increasingly interested in the role of the microbiome within the human body, researchers have determined that this population of primarily prokaryotic species plays an important role in our metabolism, as well as the ability of our organs to communicate with one another 2.

A number of scientific studies have been conducted to establish the link between the concentration of various bacterial species in the gut and its effect on psychological conditions such as anxiety and depression.

Additionally, researchers have found that several factors of our early life, such as whether you were delivered by vaginal or cesarean delivery or whether your mother breastfed you or gave you the formula, can have significant effects on your microbiota later into your adulthood, thereby having the potential to promote long-term effects on your brain and behavior.

Daily influences on the way our microbiota functions include 3:

The Effects of Stress on the Gut 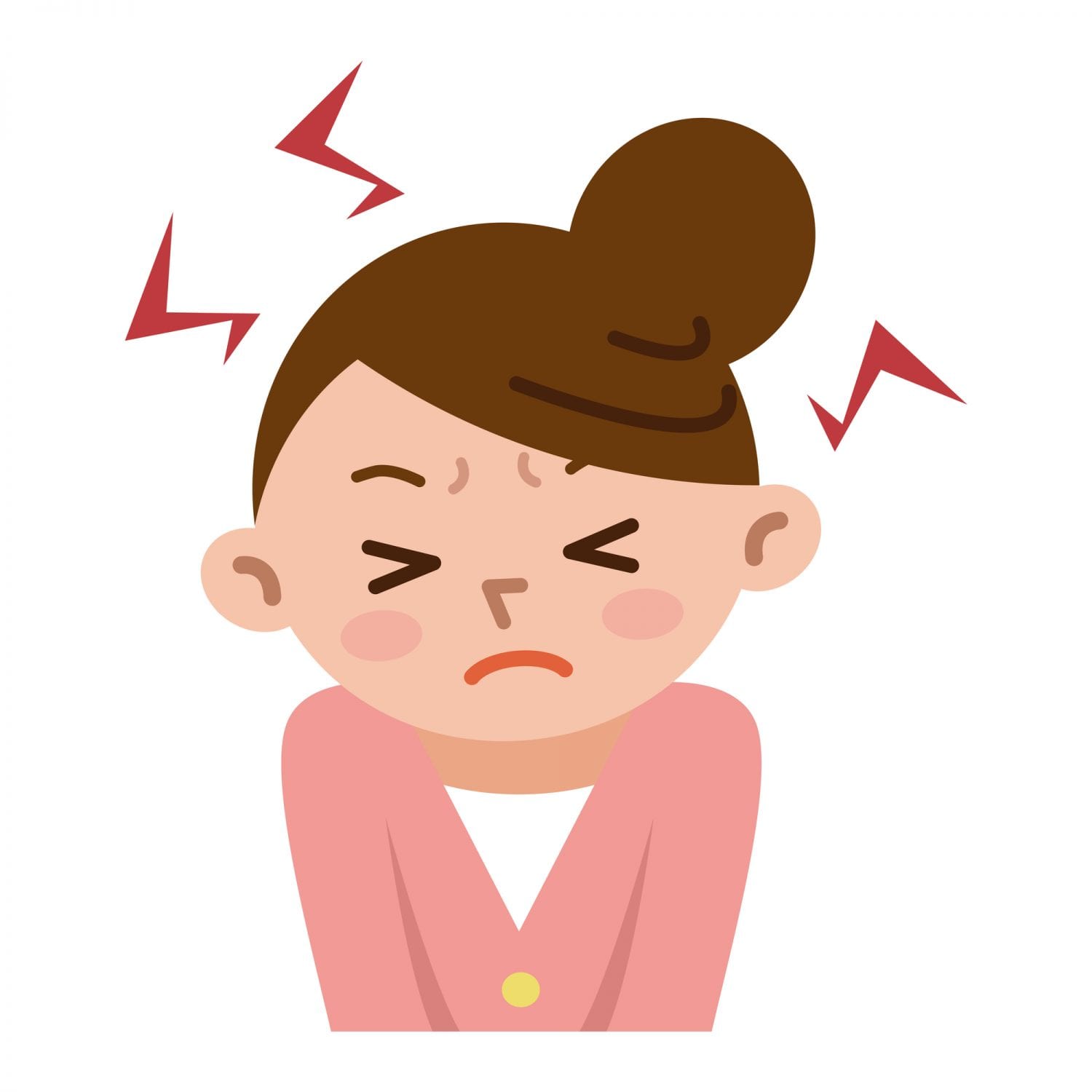 Any type of stress that we experience in life will cause our bodies to release a number of chemicals that are in the form of neurotransmitters and hormones.

The two major hormones that play a role in our body’s response to stress include adrenaline and cortisol 4.

These hormones are primarily secreted when our body enters the “fight or flight” response, which is our body’s way of preserving energy that it perceives to be unnecessary for certain tasks, and instead transfer those resources to a different area of the body.

For example, if you were to walk outside of your house this morning and see a lion staring you down, the blood flow in your body would move away from your GI tract to your arms and legs to run away from the danger. At this moment of crisis and panic, your body realizes that digesting your food is not the most important way you can use your energy and resources.

While this is an extreme situation, your body responds to all stresses in the same way 4. Long-term stress therefore continuously diverts blood flow from the GI tract, thereby causing the lining of your gut to break down and become unable to fight against harmful bacteria or other unwanted species that can affect our microbiome.

A poorly balanced microbiome can lead to a number of digestive disorders as a result of an inability to absorb nutrients properly, which can thereby promote food allergies and inflammation within the digestive system. 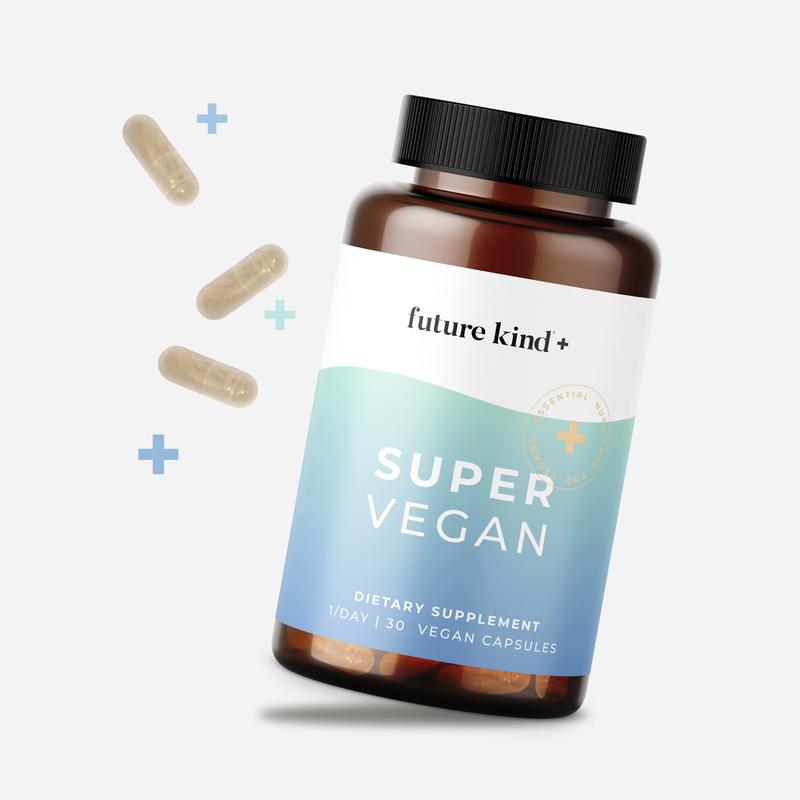 By combining the 3 most potent herbs for stress-management: Ashwagandha, Rhodiola and Lemon Balm, Future Kind+ offers one of the most effective stress relief supplements on the market right now

How IBS and SIBO Affects the Brain

While there is a great deal of research that has connected the influences of stress and other psychological disorders to negatively affect our microbiome, promote inflammation and exacerbate other GI disorders, little research has been done to understand the opposite relationship of how conditions like SIBO and IBS can have a serious effect on our psychological well-being.

Individuals suffering from GI disorders such as SIBO and IBS are no strangers to consistent pain in their life that is often related to the frequency of their bowel movements, which can either be too much (diarrhea) or too little stool production (constipation), or even a combination of both, abdominal bloating or an intolerance to some type of food ingredient.

The persistence of these frustrating symptoms and the often inability to recognize when they are about to arise can cause patients to become increasingly anxious, depressed and stressed.

Subscribe to get info on the best stress reduction tactics for your gut.

Success! Now check your email to confirm your subscription.

Take this situation for example:

After years of battling with abdominal bloating, pain and diarrhea, John Doe has finally been given a proper final diagnosis of IBS with SIBO.

John would go to doctor after doctor complaining of his symptoms, however, he was often dismissed by these physicians who would either claim that these symptoms were flu-related or all in his head. Not only did the symptoms not go away, but John would constantly worry about whether he was just being dramatic about his symptoms or if there was something more that was really going on.

The lack of trust John felt in his physicians not only prevented him from getting the proper treatment for his GI condition for a number of years but also caused him a great deal of stress and depression. These feelings are common for many people suffering from GI conditions that have either been misdiagnosed, completely brushed off or who have lived with IBS for a long period of time.

Once John got his SIBO diagnosis and began following a low FODMAP diet, he began to find some relief – finally! However, the traumatizing experience that John had before his diagnosis made him constantly question every decision he made regarding his diet and made him afraid to be around people because of the uncertainty of a gut attack – in fact, he would often ask himself, “is this going to make me feel sick again?” and “I feel a slight pain in my stomach – this is only going to get worse from here.”

John’s traumatic experience battling with his GI symptoms left him paranoid and constantly stressed, even after he received his SIBO diagnosis. Even though certain treatments can effectively reduce the propagation of symptoms associated with GI disorders like SIBO and IBS, an individual’s negative thoughts on their condition can lead to not only poor treatment outcomes, but also increase the severity of their symptoms.

Patients like John can often benefit from cognitive therapies that work with them to disrupt these negative thoughts they have developed living with a functional gut disorder for a length of time.

In fact, medical hypnotherapy has been shown to improve the emotional state of individuals with GI disorders, as it allows the brain of our CNS and the “second brain” of the ENS to communicate and help one another better.

Hypersensitivity is a commonly used term for our body’s immune system to give a more intense response to a given pathogen.

In the case of visceral, which is a term used to describe the inner organs of the body, hypersensitivity, individuals suffering from a certain GI condition, such as IBS, become increasingly sensitive in their response to symptoms that they have experienced before 5.

What this means is that although a patient may have experienced abdominal pain associated with diarrhea before, their body, over time, becomes so increasingly sensitive to the presence of diarrhea that the abdominal pain becomes almost unbearable each time they experience it.

The following diagram provides a detailed explanation as to the cascade of events that lead to visceral hypersensitivity: 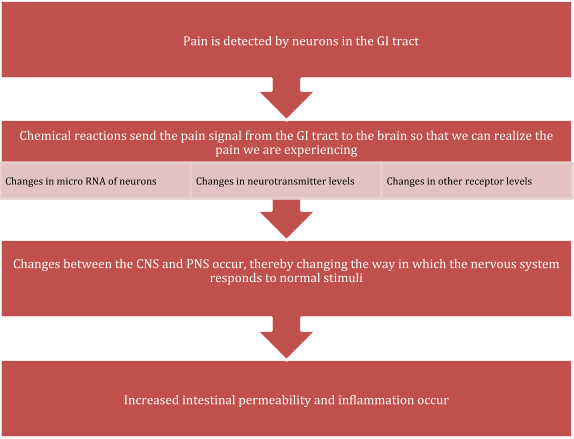 As researchers within the scientific community continue to gain a better understanding of the complexity of the gut-brain relationship, the development of more sensitive medications will also arise in an effort to not only provide relief from IBS, SIBO and related GI disorder symptoms, but to also specifically target areas of dysfunction that promote these various responses throughout the body.